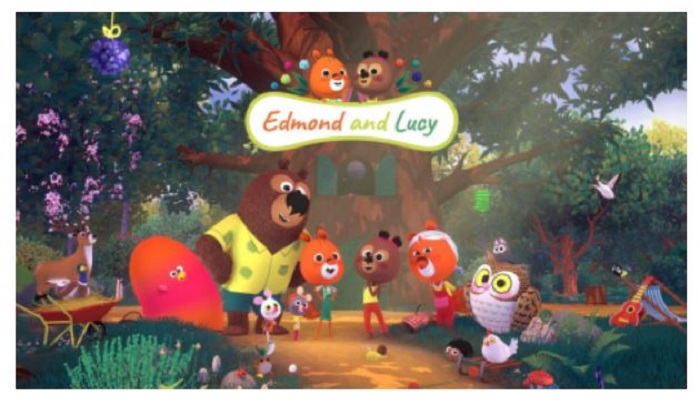 YUM ! the animated animated series ‘Edmond and Lucy’ is a good mix of entertainment and eco-responsibility

This new preschool series is an adaptation of the album collection Edmond and his friends by Astrid Desbordes and Marc Boutavant, edited by Nathan, translated into 15 languages ​​and sold in 20 countries. The show aims to reconnect children to the forest throughout the four seasons. Meet Edmond, the squirrel, and Lucy, the bear cub, and follow them on their daily adventures in the great outdoors: nature is their best playmate!

Edmund and Lucia is a show made in France by 3 studios: YUM! studio, Jungler and Artifacts.

Throughout the 52 12-minute episodes, children will follow the outdoor adventures of a cheerful band of friends, led by two spirited heroes. Over the four seasons, this little troupe plays, builds, explores, observes and discovers the mysteries of the surrounding woods, which gradually become a huge and fantastic playground.

Edmund and Lucia is both educational and fun, and promotes the values ​​of living together, inclusion, empathy and solidarity. A program celebrating knowledge, family time and respect for nature.

Each episode was written in collaboration with three naturalist experts (CSR expert, author and agricultural engineer Louise Browaeys, author and head of the education department at the NGO Sous le Pôle Gaëlle Bouttier Guérive – Didier Moreau, naturalist, ethnobotanist and specialist in experimental ecology ). They worked with the production and writing teams to choose broad themes to explore, then endorsed wildlife and nature content at every stage of writing and production.

Each episode will therefore bring its small contribution to the construction of a better world!

A word from the broadcasters

“We will continue to tell children enchanting stories about the world around them and encourage them to protect it. We want to go even further and go faster with all our producer partners on eco-responsible content broadcast on the Okoo platform and act on the carbon footprint of our broadcast facilities. The release of the series Edmund and Lucia marks the beginning of this very proactive approach.

“We are very happy to have this series on Okoo this summer.”

Hessischer Rundfunk, Head of Fiction and Family at HR Patricia Vasapollo, said: “We are very happy to be part of the innovative and very charming new preschool series. Edmund and Lucia. Together with our reliable partners at MIAM! animation, we are proud to break new ground by co-producing the first-ever real-time animated series for a public broadcaster here in Germany. With Edmund and Lucia, we’ll not only bring beloved characters from Marc Boutavant’s books to life, but we can also integrate the nature curriculum through interactive storytelling and gamification, making respect for nature accessible to your young audience in an entertaining way.

A word from the producers

Director and artistic director François Narboux said: “Our project was to give children behind their screens the pleasure of being outdoors. We wanted to give life to the forest and achieve the richness of atmospheres, textures, vegetation worthy of the most demanding art critic: the graphic author Marc Boutavant! Real-time 3D was the ideal technical solution. By almost completely eliminating the very time-consuming and expensive traditional phases of CGI image calculation, we have obtained an iterative production pipeline. This pipeline allows us to obtain an almost unlimited enrichment of our images. The icing on the cake: the real-time engine we used has significantly reduced global carbon production waste and therefore fits our concept perfectly. Marc is delighted and so are we!

CEO and Executive Producer Hanna Bouchez said, “Edmund and Lucia is the first production of MIAM! : the next broadcast of the show will be quite a moving moment for us! This project has rooted our entire entrepreneurial approach. The concept of reconnecting children with nature resonates with the sustainable production pipeline we have created with our partners. We have produced a series of better quality, with a controlled budget while significantly reducing our environmental impact. It is a real revolution. At a time when calculating the carbon expenditure of any production will become mandatory for all industry players, the use of real-time 3D is a solid competitive advantage. France Télévisions and the CNC are historical partners without whom we would not have been able to carry out this R&D work.

“We are very grateful to them!”

Technological innovation at the service of the environment

Already very noticed in festivals and professional events, Edmund and Lucia is a world first: it is the first 52×12′ animated series, almost entirely made in real-time CGI, to be broadcast on a linear channel. This technological choice corresponds to an artistic and sustainable choice consistent with the very concept of the series.

To achieve the artistic ambition of adapting Marc Boutavant’s universe in CGI for the first time and bringing the forest to life as a character in its own right, MIAM! The animation teams have initiated technological development in order to use the real-time CGI rendering engine called Unity. The choice of real-time technology allows children and their families to take part in the adventure and continue to discover the show thanks to a whole range of complementary interactive content (quizzes, activities, interactive video games).

The use of real time reduces the number of manufacturing steps in the series, in particular the time required to render images. Episodes are rendered on a single machine, in just a few hours, instead of being rendered using multiple computers over a period of weeks as is the case with pre-rendered CGIs. Real time therefore makes it possible to significantly reduce carbon emissions from production.

In pre-rendered CGI, images are rendered using air-conditioned render farms that operate night and day and are dedicated to a single task: rendering images. Episodes must be composed and are often calculated three or four times in their entirety.

In the “best case”, an HD image takes 20 minutes to render, or 500 minutes for one second of animation, or 229 days to render a single 11′ episode with a traditional CGI renderer on a single machine. We can easily understand why studios use render farms with hundreds of computers to reduce this time to weeks or months.

With a real-time CGI rendering engine, a 4K image is calculated in half a second, i.e. approximately 12 minutes for one minute of animation, or 2h30 to calculate an 11′ episode, on a single machine.

Edmond and Lucy are raised as brother and sister in a stately chestnut grove they call home, a sort of radiant forest town. Playing and growing up in the heart of nature, unraveling its mysteries and experiencing adventures in the great outdoors… what a beautiful life!