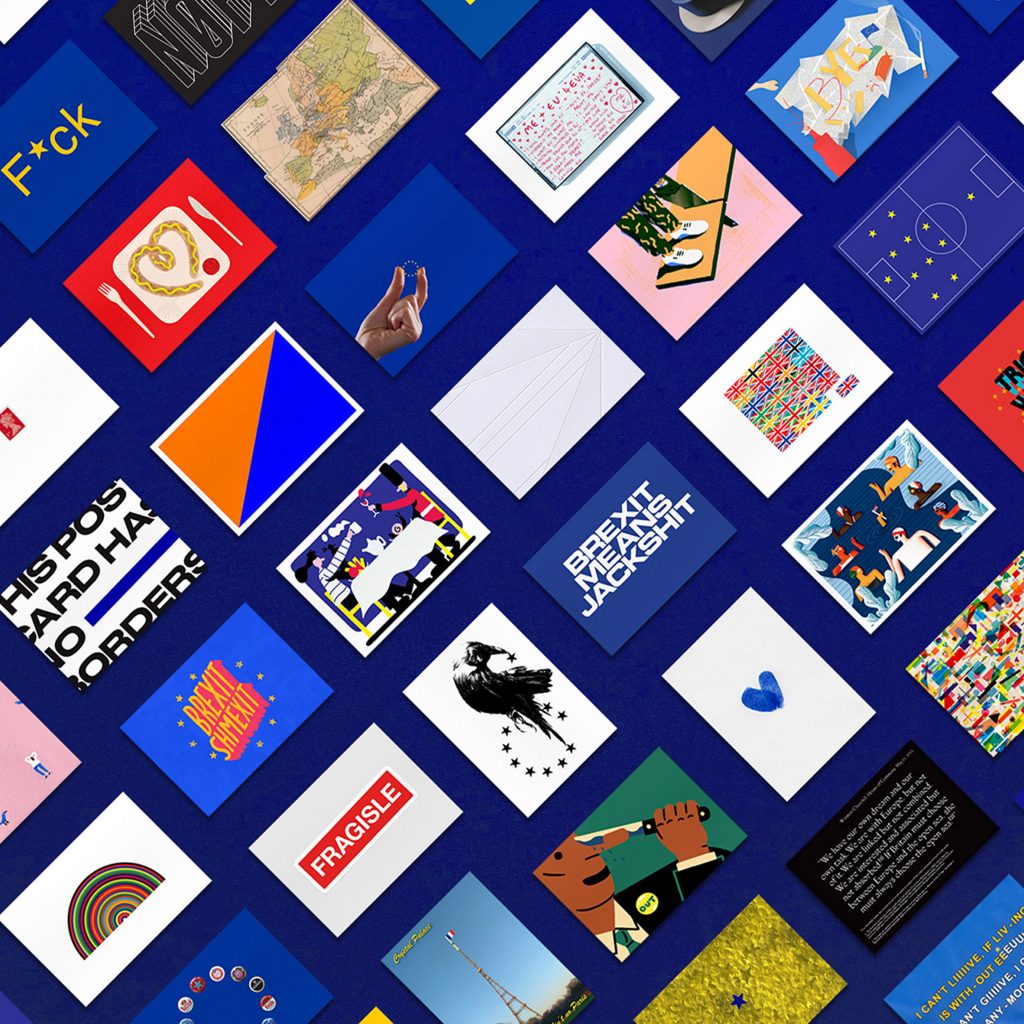 Top 10 graphic designs and illustrations by Dezeen in 2017

From postcards that respond to politics to posters suggesting a vacation on Mars, here are some of the best graphic design and illustration projects of 2017, hand picked by editorial assistant Gunseli Yalcinkaya.

Book Me and the EU by Nathan and Sam Smith

This year, London designers Nathan Smith and Sam T Smith published a book filled with postcards that respond to Brexit.

Containing over 100 designs, the postcards feature an illustration of a ‘shocked’ London Eye and a parody of the horror film The Shining, adapted for then UKIP leader Nigel Farage. The book was sent to European studios and artists on the day the Article 50 withdrawal process was triggered, to encourage post-Brexit collaborations.

The Land of Dreams by Studio Moross

Studio Moross posters for the recently reopened Dreamland in Margate celebrate the former glory of the historic UK exhibition grounds.

Through the use of wacky illustrations, bright colors, and inventive puns, the posters have a vintage feel reminiscent of music festivals.

Intended to inspire women in the Netherlands and around the world to get started in football, the logo is described as “a symbol of power, strength, elegance and agility”.

Find out more about the Dutch national football kit

Find it by IC4 Design and DDB

Led by the slogan ‘Finding women shouldn’t be so difficult’, this campaign for UN Women in Egypt, by illustrators IC4Design and marketing agency DDB, was designed too draw attention to the lack of women in the Egyptian workforce, which is only 23 percent women.

The illustration offered a new approach to tackling the all too real problem of gender inequality in the workspace.

Learn more about Find her â€º

Each of the three beers is represented by a different metallic color: gold for Log Lady Lager, in reference to Margaret Lanterman’s character “Log Lady” and her clairvoyant piece of wood, red for Red Room Ale and bronze for Damn Good Coffee Stout.

The newest addition to NASA’s collection of posters promoting other worlds as vacation spots is a design depicting the planet TRAPPIST-1e.

The poster features a retro vision of two passengers looking out a window at a red and blue citadel, aligned by orbiting moons.

Yayoi Kusama: from here to infinity! by Ellen Weinstein and Sarah Suzuki

Yayoi Kusama: from here to infinity! is a book documenting the life and work of the prolific Japanese artist.

Learn more about Yayoi Kusama: from here to infinity! â€º

American rock band The National’s album cover for the record Sleep Well Beast was recently nominated for a Grammy for Best Packaging. Designed in collaboration with Luke Hayman of Pentagram, the album boasts an extensive collection of merchandise – ranging from t-shirts to staplers and duct tape dispensers.

Inspired by the ‘retro, slightly monotonous’ identity of the corporate brand of the 1970s, the design of the record is a playful nod to political propaganda, particularly in lieu of the election of Donald Trump.

London illustrator Rob Flowers’ edible poster series for an exhibition to encourage children to experiment with their food offers an example of how graphic design can be used in innovative ways.

The six posters were inspired by the â€œultimate food fantasiesâ€ suggested by children. They played a mix of fruit and veg cartoon characters, including flatulent broccoli and windswept parsnip.

These posters by astronomer and artist Tyler Nordgren revealed places where viewers were able to observe the 2017 solar eclipse.

Nordgren used bright colors and graphic lettering to announce each point of view. Each poster also provided safety information on how to watch the event safely.