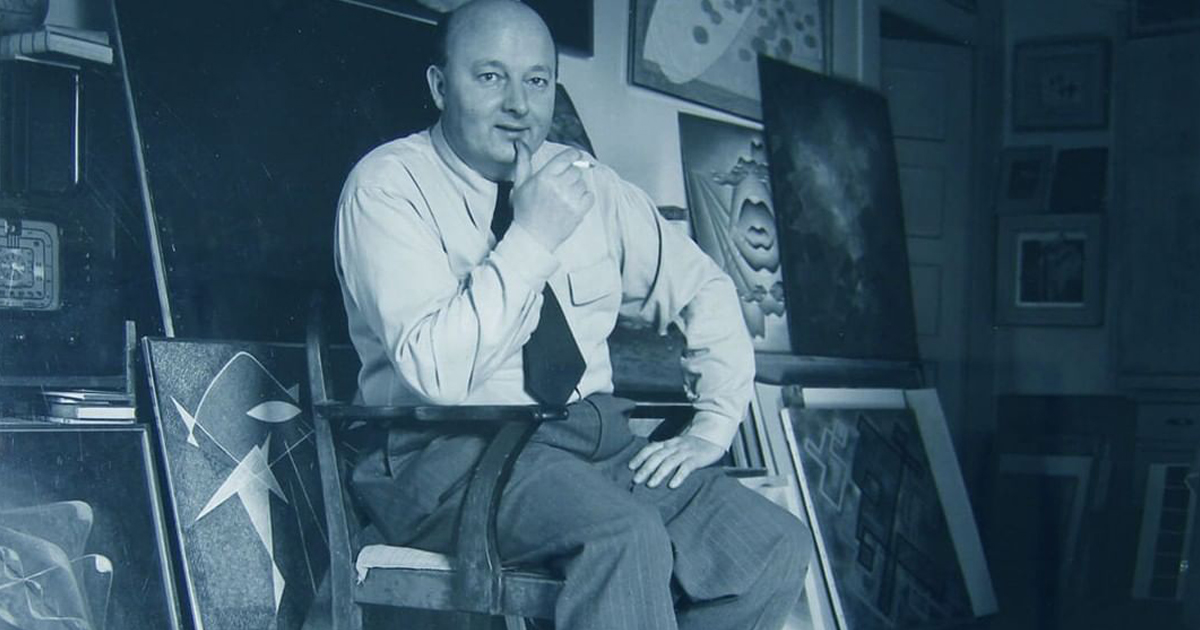 The pioneer of experimental animation

At the turn of the 20th century, the animation world was dominated by Walt Disney and his ever popular cartoon character, Mickey Mouse. But while Disney was developing a whole slew of anthropomorphized animals, there was one avant-garde filmmaker who was doing the exact opposite.

German animator Oskar Fischinger brought abstract forms to life by exploring the relationship between sound and image. He created an influential series of experimental shorts featuring circles, squares, and lines that seemed to dance to the music.

Fischinger was a German-American animator, filmmaker, and painter who is best known for creating abstract animations that accompany music. Long before computer graphics, Fischinger spent months, if not years, meticulously hand-painting on glass and photographing each frame. He would then arrange them together to synchronize perfectly with the musical compositions. The prolific artist has made more than 50 short films and painted around 800 canvases.

Born in 1900 in Gelhausen, Germany, Fischinger trained as a musician and architect before discovering cinema. In 1920 he was introduced to film critic Bernhard Diebold, who was impressed by Fischinger’s abstract sketches and suggested that he get into the cinema. The following year, Fischinger attended the first public screening of Walther Ruttmann’s film Opus I light show. Fischinger was so inspired by the film that he decided to devote his time and creativity to ‘absolute cinema’, a non-narrative, experimental style of film that allowed Fischinger to merge his love of music and art. .

Fischinger moved to Munich and began a full-time career in film. While working on his visual experiments, he supported himself financially by forming a company that produced satirical cartoons. For his first abstract animations, such as Wax experiments and Spirals, Fischinger created intricate and mesmerizing movements using unconventional methods. Wax experiments was made using his own machine which he called a “wax slicer”. He synchronized a vertical slicer with a camera shutter, capturing sequential images of cross-sections through a length of molded wax and clay.

In June 1927, Fischinger traveled on foot from Munich to Berlin to escape his financial difficulties. He recorded his trip in a series of single-frame photos which he then turned into a short film. Walking from Munich to Berlin greatly influenced later artists who explored visual journals in cinema.

In 1929, Fischinger was hired to create special effects – rockets, stars, and outer space landscapes – for the film. woman on the moon directed by Fritz Lang. However, after breaking an ankle on set, Fischinger was forced to create everything from the hospital. He started drawing charcoal animations on paper, which led him to Studies series.

Fischinger Studies The series featured hand-drawn patterns and geometric shapes that moved in sync with the music. Short films were popular around the world, but the rise of Nazism led to them being labeled as â€œdegenerate artâ€. Meanwhile, the Nazis hated all non-figurative art. Along with Fischinger, abstract artists such as Paul Klee and Wassily Kandinsky were seen as unsuccessful creators.

But that didn’t stop Fischinger from making films. The era also saw the invention of the Gasparcolor process, allowing it to create color animations. Fischinger produced a film titled Circles (1933-1934), which served as an advertising film. He also produced a second color film, Composition in Blue, that he submitted to foreign festivals without official authorization from the Nazi authorities. Shortly after its production, Fischinger fled to Hollywood in an attempt to escape persecution and pursue new opportunities.

Life and work in the United States

Fischinger was drawn to Hollywood in 1936 with the promise of a job at Paramount Studios. He started working on a color film that was originally titled Radio dynamics (called today Allegretto), which was to be included in the feature film, The great circulation of 1937 (1936).

Unbeknownst to Fischinger, however, Paramount had planned to release the film in black and white, and the studio was unable to test Fischinger’s color film. Fischinger applied to be fired and quit his job at Paramount Studios. A few years later, he bought the film back with a grant from the Museum of Non-Objective Painting (later known as The Guggenheim). Fischinger repainted the cells based on his original colored vision, and Allegretto has become one of the most successful films to visualize music in history.

Most of Fischinger’s attempts at making films in the United States have failed in one way or another (or at least his attempts to earn money or recognition). In 1937, he composed a Optical poem to accompany Franz Liszt Second Hungarian Rhapsody for MGM, however, he received no benefit for his work. He also designed an abstract animation for Disney’s 1940s hit, Fancy, but left without credit because Disney changed their designs to be more representative.

After many struggles to be successful in Hollywood, Fischinger began to engage in oil painting. He combined his passion for painting with animation in his 1947 film, Motion Painting n Â° 1. For this animation, Fischinger captured the fascinating process of painting by photographing each brush stroke applied to the canvas. The film ended up winning the Grand Prix of the International Experimental Film Competition in Brussels in 1949 and is still one of his most famous works. Fischinger died in Los Angeles in 1967, but his legacy lives on through his groundbreaking work.

5 early animation pioneers who influenced the future of cinema

Studio Ghibli: everything you need to know about the legendary Japanese animation house

9 abstract artists who changed the way we think about painting