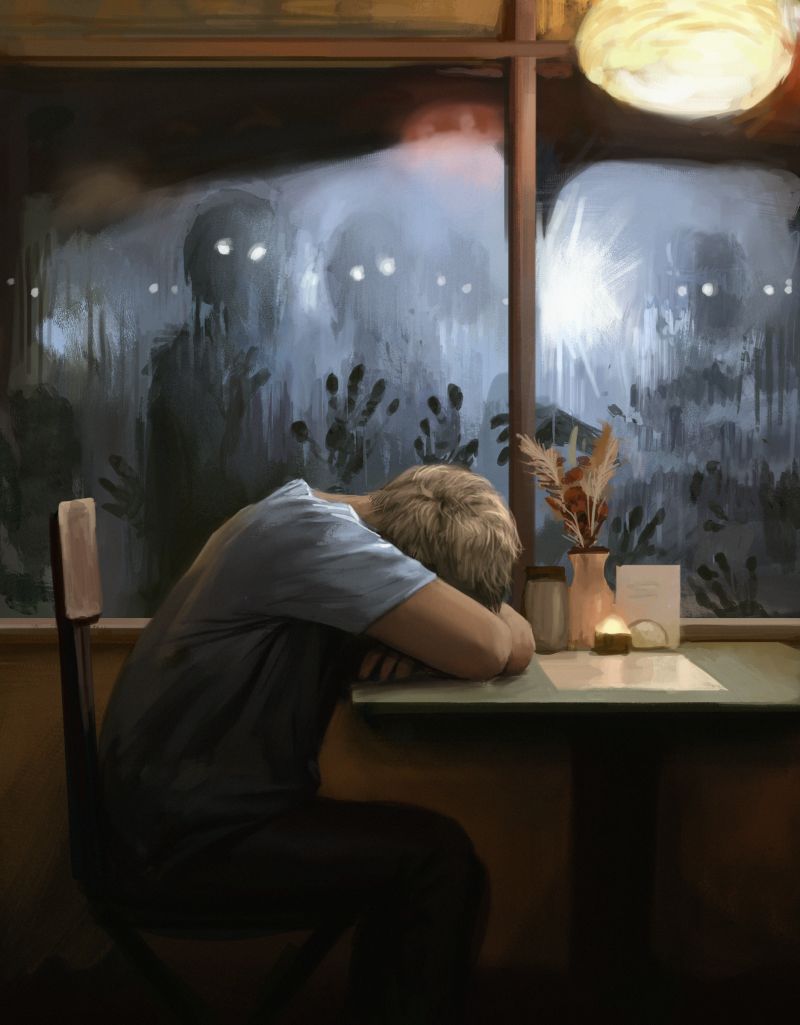 The Art of Stefan Koidl recently had a hugely successful Kickstarter campaign, completely smashing Stefan’s humble goal of seven thousand pounds, showing just how much his fans appreciate his spooky and haunting scenes. We’re talking about eerie futuristic cityscapes where the rule of law doesn’t exist, ghouls that only appear when you look in the mirror, and eyes that seem to follow us everywhere. Stefan also has a passion for sculpting Krampus masks, which also get a lot of likes on his popular Instagram feed.

In his book, Stefan plans to show his passion for his work, share stories behind some of his creations, talk about his experiences transforming art into a career, and break down his creative processes. It will also feature stories written by its incredibly loyal fans, who love adding storytelling to its dark works. It’s an interesting interaction where the artist imagines a spooky scene and his followers interpret what it might mean. “My illustrations speak for themselves but I’ve always had a desire to attach a story to them,” Stefan tells Creative Boom. “Personally, it’s always been a bit difficult for me to write, because I don’t really feel like I can express myself the way I want to. That’s where my fans came in to help me. , writing their own stories and interpretations of my work.”

“I particularly enjoy painting scary, dark stuff – I find it exciting to ‘play’ with a viewer’s fear,” he adds. And it plays, tapping into our darkest fears. Is there something scaring Stefan? “I’m relatively hardened by horror movies and computer games,” he tells us. “But if I had to choose one thing, it would probably be a classic, like the invisible or being alone in the forest at night. Who isn’t afraid to be alone in total darkness in the woods and hear strange noises? It’s the unknown and unrecognizable that scares me. I can say that things like orcs, demons or other creatures don’t scare me, because it’s something figurative and I can define it exactly.”

Based in Hallein, Austria, Stefan is a freelance illustrator whose clients include Dark Horse Comics, Hi-Rez Studios, Ravensburger and Rhino Games. As mentioned earlier, he is also a sculptor of Krampus masks – Krampus being an Austrian tradition where hundreds of people dress up as half goat, half demon every December and run through the streets of Austrian cities. The character’s role in folklore is to punish children who have been naughty. Yes, terrifying.

Stefan is hugely inspired by his favorite artist, Simon Stalenhag, as well as films and TV series such as Lord of the Rings and Vikings. “One of my favorite series is Stranger Things. The atmosphere and the mystery it conveys often hit home. It takes you back to childhood, even if you weren’t born then,” he says.

His book, The Art of Stefan Koidl, should be available from next May. Two versions of his book are in preparation: a standard edition and a premium. Bound and printed on high-quality Munken Arctic paper, it will contain 320 pages of terrifying artwork and stories. The premium version will include a case, creating a true collector’s item.

“I never thought that my passion for such gruesome subjects in my art would attract such a wide audience,” says Stefan. “From the first photo I uploaded until now, my viewers have always been there for me and have followed my career with dedication. This book is a dream come true. Seeing how my artistic development has been immortalized in this piece per piece fills me with pride.”

Fans of Stefan’s work can purchase one of his popular prints on Displate and follow more updates to his book on Instagram.

The time for Indian animation has come