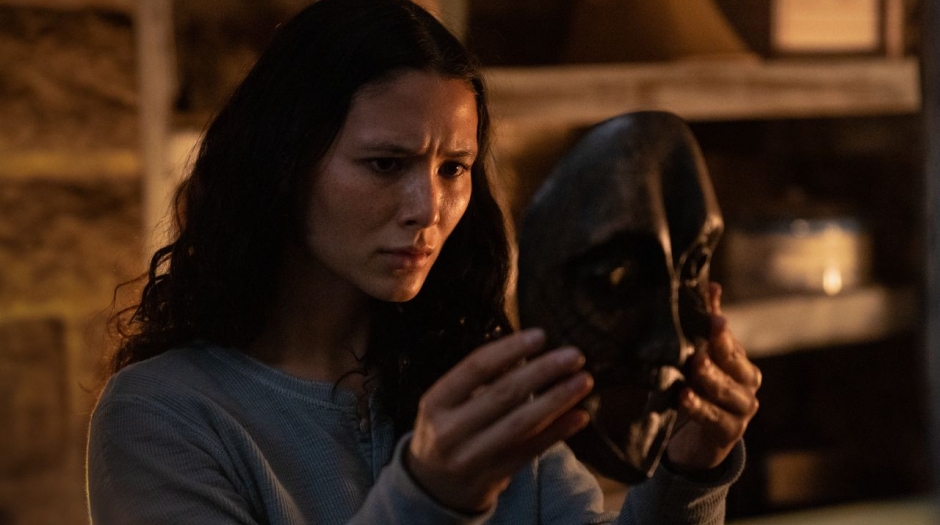 The film’s title – the Korean word for “mother” – alludes to the generational trauma at the heart of its story. According to Sony’s official synopsis, Ouma follows Amanda (Sandra Oh) and her daughter (Fivel Stewart) living a quiet life on an American farm. When the remains of her estranged mother arrive from Korea, Amanda becomes haunted by the fear of becoming her own mother.

In the trailer, Amanda and her daughter’s peaceful existence – gathering honey, raising chicks – is disrupted by a visit from a menacing man, who gives Amanda a strange box which he believes contains the angry spirit of his deceased mother. Once, the man asks her, “What kind of girl abandons her own mother?” Amanda’s calm demeanor begins to fracture and we learn that she has gone to great lengths to hide any knowledge of her umma from her daughter.

From there, we get disturbing glimpses of ancient artifacts being passed down to Amanda, and shocking visions of cloaked apparitions sneaking into her home. “Some Koreans believe that life’s difficulties are caused by the tormented spirits of their ancestors,” she says.

Rightly, Sam Raimi is among Oumathe team of producers. This isn’t the first time he’s produced a horror thriller that taps into supernatural ethnic lore; the story of his 2012 feature film, The possessionwas inspired by the allegedly haunted Dybbuk box from Jewish mythology.

Watch the trailer for Ouma below:

Max Weinstein is a Los Angeles-based writer and editor. He is the editor of “Dread Central” and former editorial director of “MovieMaker”. His work has been featured in “Cineaste”, “Fangoria”, “Playboy”, “Vice” and “The Week”.