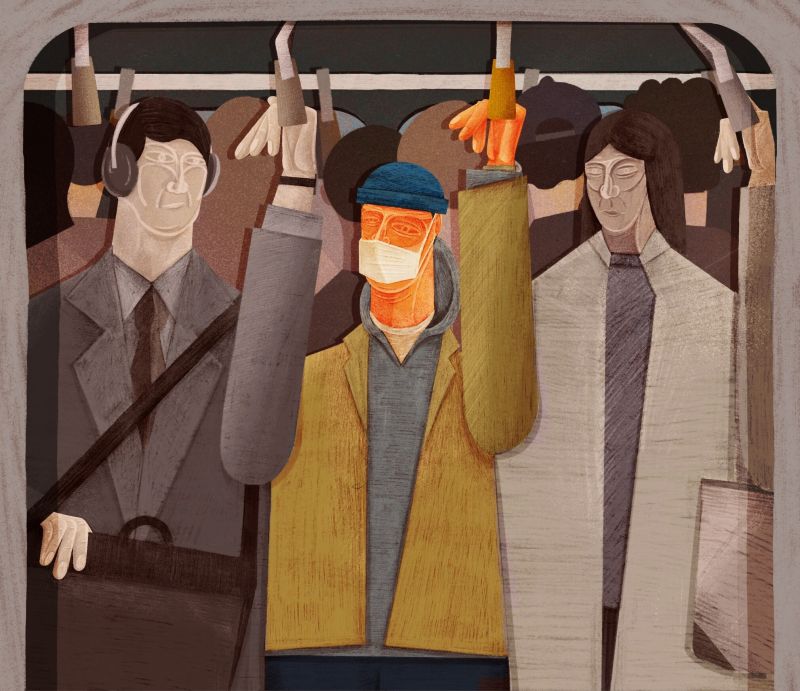 The field of illustration was not always there for Po-An Pan. However, he enjoyed drawing growing up in Taipei, where he admits struggling with traditional education. After completing his four-month military service, he moved to the UK in 2017 to study design at London College of Communication and later Graphic Communication Design at Central Saint Martins. A lane was then cleared.

“This is where I started to find clues and realized that creating illustrations has always been my favorite way of expressing myself and accepting pressure,” Po-An told Creative Boom. “Throughout my stay at Central Saint Martins, I experimented with various media such as printmaking, film photography and 2D animation. The most important lesson was the concept of the design process, which taught me to think and develop alongside the journey. Likewise, I like the way Geoff McFetridge, a visual artist, presented himself as a designer rather than an illustrator, as it opens up the possibility of various projects. “

Although Po-An admits it took him a while to develop his own style, something we all struggle with, he has now found a niche by creating rough-textured works of art that play on the reality of life but take an ironic approach with “weird humor” and soft colors throughout. His pencil illustrations, while surreal, could be described as charming and peaceful thanks to the warm, muted colors he applies to his work. “The rough but lively texture of the colored pencil allows me to illustrate the emotions and kindness of humanity in two-dimensional mediums and to make the connection with my childhood memories, in which the drawing has always been my favorite way to express myself freely, ”he explains.

A recurring theme in Po-An’s recent work has been the idea of ​​awkwardness. “This is something that comes up constantly in everyday life and cannot be avoided,” he says. “After being home alone for so long, awkwardness can lead to an uncomfortable situation. Even now, in early 2022, I’m still struggling to adjust to the ‘new normal’ and awaken my ability. Through my sense of humor, my thinking, my daily experiences, the news I read and my illustration, I embrace what happened and illustrate the relationship between me and the awkward feeling. Realization triggers my illustrations towards a new direction which hopefully can season the bizarre situation with a taste of humor. “

In New Normal, for example, we see Po-An’s attempt to come back to life before the pandemic: “I’m trying to capture the awkward emotion, which comes from returning to normal, but I’m also afraid of. the new reality, “he says. While in Balance in Life, we see how Po-An may have coped with two years of lockdowns and restrictions.” During the pandemic, staying alone in London as a foreigner is a constant struggle within me, “he says.” The concept of mindfulness, how to meditate and self-reflection leads me to realize the essence of balance in life. “

The theme of awkwardness continues in Same Costume, an illustration that celebrates Halloween but with the concept of being in the same costume as someone else. Po-An animated this particular piece with movement adding a “light layer to the work”, as he puts it. And in The Awkward Reunion, Po-An was inspired by his trip to the Oxford Botanic Garden: “I illustrate my visit to the greenhouse and visualize the moment embraced by nature. By adding some weird facial expressions and the title to this pair of illustrations, I hope the combination can make people smile. “

The tone clears up for Po-An’s Jazz on a Summer’s Day: “Being a Jazz enthusiast, I am inspired by a scene from the documentary concert of the same name. My interpretation of jazz is immersed in illustration, full of emotion and energy. but presented with tenderness. ”

Elsewhere, we learn Po-An’s love for furniture design in a series that pays homage to certain classics, such as The Thonet Rocking Chair and Alvar Aalto’s Aalto Half-Round Table. You can discover more of Po-An’s illustrations and creative practices at panpoan.com.