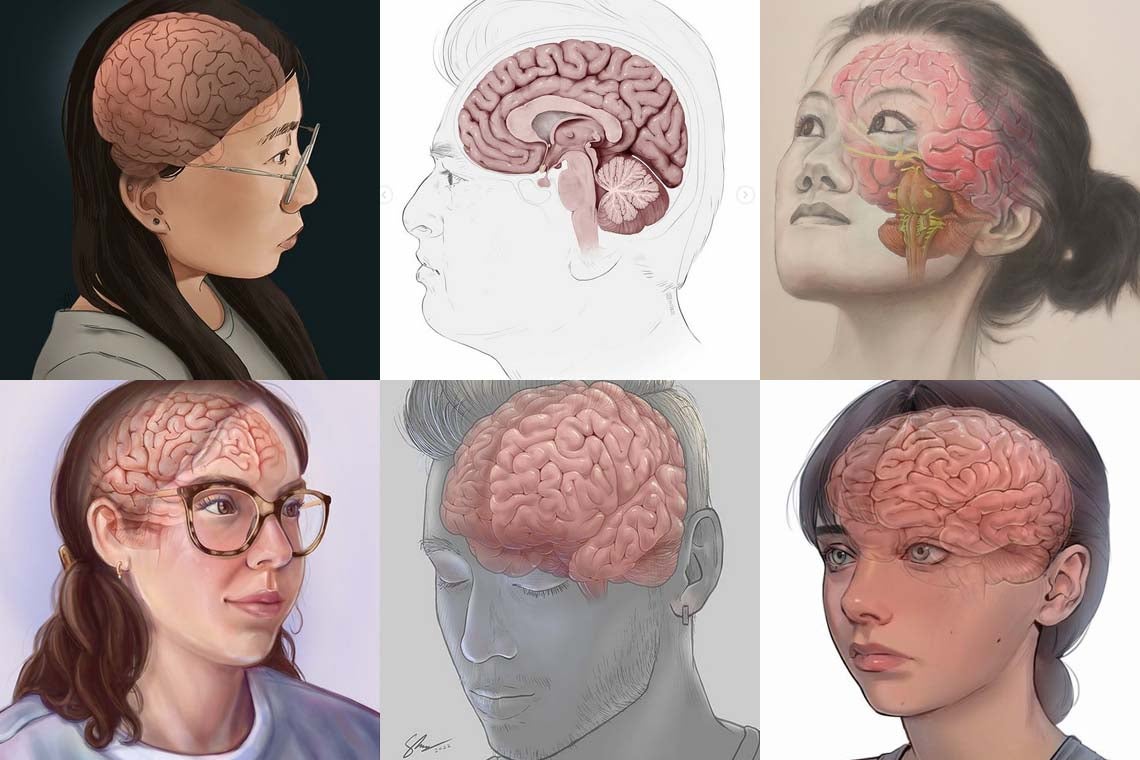 A medical illustrator may well be asked to create illustrations of the brain during their career, but assignments rarely get personal.

Shelley Wallassociate professor of biomedical communications and biology at the University of Toronto at Mississauga, said she wanted to test the design and rendering skills of graduate students when the “neuroanatomy for visual communication” course came up. been carried over from the first year of the Master of Science in Biomedical Communications program to its second year.

The course teaches students about the structure and function of the brain and cranial nerves. They participate in interactive exercises, examine brain specimens and skulls, study historical and contemporary texts, and watch videos of dissections.

“In first year, students are still finding their way into anatomical illustration,” Wall says, adding that the first assignment in the course used to be a simple illustration of the isolated brain. “Now that Neuro is a second year course, I could take it to the next level because the students’ skills are so much more developed.

“So, I designed the neuro self-portrait mission.”

Doing the self-portrait assignment not only raised the bar in terms of comprehension, but also allowed the students to show their creativity.

“Drawing the brain is one thing — you have to make it precise,” says Wall. “But what makes this mission so different is that you really have to understand all the important relationships between the brain, the brain and the external features of the head. And making the assignment a self-portrait is a way to also make it a very unique illustration that really puts the student’s imprint on it.

Even within course constraints and strict parameters of accurate brain representation, the course’s second-year graduate students delivered a wide range of unique and original illustrations.

“I used carbon dust to create a black and white self-portrait with less saturation and color to not compete with the brain illustration,” Guo explains. “I used acrylic paint for its vibrant colors and to highlight the brain.”

Guo also added a whole new layer of complexity to the mission by depicting the brain at an upward and three-quarter angle.

“I chose this perspective to show all the crucial anatomical parts – the cerebral hemisphere, the cerebellum, the brainstem, and the origins of the cranial nerves,” Guo explains.

A student in Wall’s course worked with brain imaging data belonging to his father, who was diagnosed with a pituitary tumor two years ago and received copies of his MRI scans.

“Before my father’s operation in 2021, I tried to help him better understand his condition,” explains Saharan Shehryar. “I was shocked at the lack of high quality visuals available to explain the tumor in relation to the optic nerve and the rest of the brain. When this neurological affectation was introduced, it became the best excuse to help fill this void. and create a visualization of neuroanatomy that would explain my father’s condition in a meaningful and simplified way.

Saharien asked his father to pose for the portrait and he used his father’s brain scans along with many other references to illustrate the brain and tumor.

Saharien says his father, whose surgery was a success, was delighted with his neurological portrait. “After my dad saw the finished piece, he was better able to understand what he had been through,” says Saharan. “He said he wished he’d had it sooner.”

Sana KhanThe brother of posed for his portrait, which Khan created in a style that references the 19eanatomical atlas of the -century Complete treatise on human anatomy written by Jean-Baptiste Marc Bourgery, and illustrated by Nicolas Henri Jacob.

“Rather than ‘ghost’ the brain in the portrait, I wanted my illustration to look live – as if you could pull out shreds of skin and tissue to see the brain inside,” says Khan.

Bourgery’s homage to the canonical text also adds a whimsical touch to the illustration, Wall says. She adds that, for medical illustrators, the neuro self-portrait assignment, which can be viewed on the program’s Instagram account, is the perfect intersection of complexity and precision, creativity and originality.

“I like to think that this mission not only challenges the students, but also allows them to have fun artistically. »