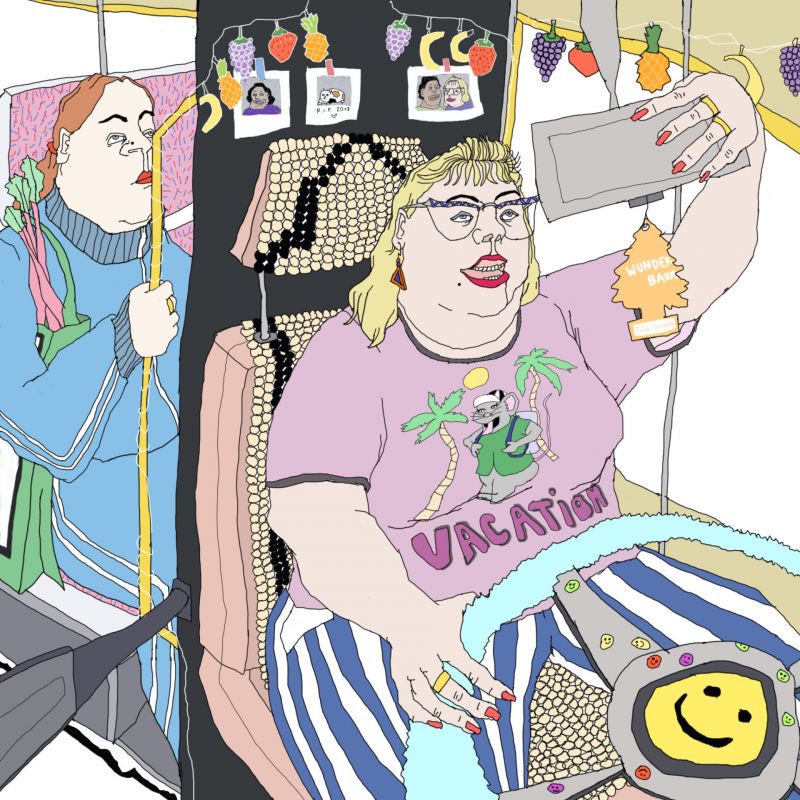 Her characters are full of life and color, and while they aren’t traditionally stylish or attractive, it’s clear that she has a great deal of affection for them. â€œI mainly deal with characters and situations,â€ Ploch told Creative Boom. “I have a rather chaotic, expressive trait that characterizes me. I like flashy, colorful combinations and intrusive personalities. I get to the heart of the matter with a lot of irony and humor.”

It is this impertinence that gives Ploch’s work an attractive rough edge. â€œI like anything that is imperfect and beyond the norm and I support all kinds of self-acceptance,â€ she adds. â€œAnd things that aren’t perfect for most people can be weird at times, but it’s always a matter of observation and I like to leave that open to the viewer. In my illustrations, the characters always stand on their own, even though they’re eccentric. And that gives me joy. I also find that people can be very rude when they don’t feel like they’re being watched. “

When it comes to inspiration, Ploch finds that “daily observations” combined with his own imagination can be enough to imagine his “vile” characters. â€œI like to observe people, then imagine what they are like, then put them in a very individually created context,â€ Ploch explains. “But apart from observation, I also like to put myself in situations that are new to me and I like to get out of my usual bubble to get to know different guys and just to listen.”

Born in 1991 in a small German town, Johanna went on to obtain a design degree during which she mainly focused on stop motion films. She then obtained a Masters in Illustration in Hamburg. She now works as a freelance illustrator for clients around the world.

“I would say that my work is motivated by the feeling that I can get while drawing,” Ploch continues. â€œI like to look for the characters in my head while I draw them. And it works in very individual circumstances. With good music, for example. Sometimes a character only becomes good when I hear the same song twenty times. imagine he is celebrating exactly that song. For example, when I was doing the illustration with the two bikers taking a break and eating fries, I would quite often listen to the song ‘Highwaystar’ by Deep Purple. I haven’t been able to hear it since then either without thinking about both. “

Looking closely at the often absurd accounts of his work, like a bustling pig cafe, merry cows drinking milk, or some sort of ‘dress like a tiger’ party, Ploch’s illustrations also remind us not to take life too seriously. â€œHave fun, be exactly who you are, don’t take yourself too seriously and do exactly what you want and accept when others do too,â€ she says. â€œAnd trust your process! “

For more beautifully grotesque characters and fun observations, follow Ploch’s latest work on her. Instagram. Or visit his portfolio on johannaploch.de.