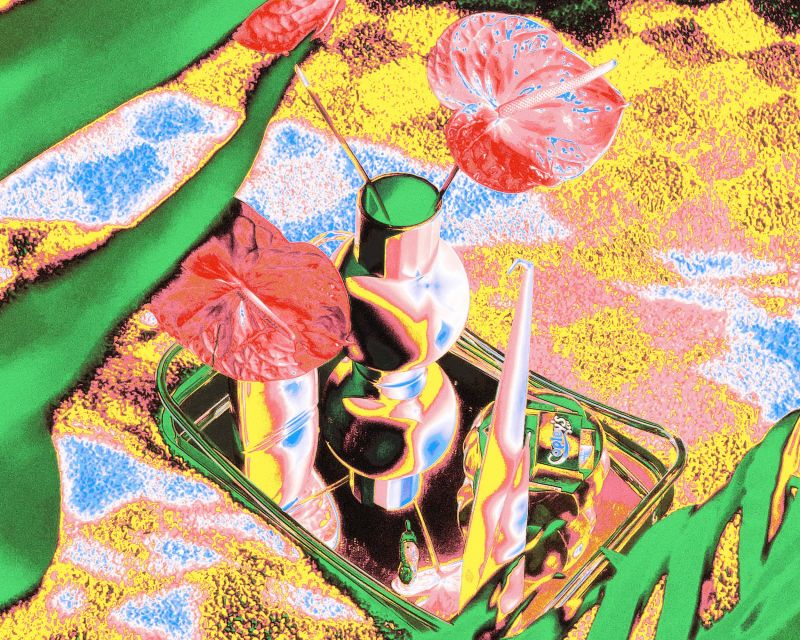 A sense of identity can come from all sorts of places, including areas that at first glance would seem mundane. It’s part of the thought process behind Javier’s trippy digital illustrations for Xtrano, which see everyday objects such as a can of pinto beans and household cleaning supplies take on a nostalgic meaning.

“The concept was born out of the need to reconnect with my roots and the desire to illustrate distant memories of my time in Latin America,” Javier told Creative Boom. “Being an immigrant forces you to adapt to a new environment, and you may lose some of your cultural identity in the process.”

To recapture that cultural identity, Javier highlights objects and products you’ll only find in Latinx immigrant households in the United States. These include Bustelo, a brand of coffee that is a kitchen cupboard staple for Cuban-Americans, as well as Fabuloso, a favorite household cleaner among the Latinx community.

“I wanted the visuals to remain ambiguous and open to the viewer’s interpretation,” says Javier. “That’s why I use objects rather than people as the main subjects in my pieces.” To add to this ambiguity, Javier’s images increase the saturation up to eleven, which gives the colors a neon, almost searing look. It’s a dynamic contrast between the everyday and the hyper-real, helping to evoke a sense of nostalgia for a time that has passed.

Speaking about how he worked on Xtrano, Javier said: “It’s a very mixed process. Usually it starts with me arranging the still life by hand and photographing it or creating a rendering 3D if I don’t have access to the products/props needed to illustrate my idea.Then they go through a series of digital manipulations to achieve the result.I usually stick to the same color palette to have some cohesion .

Fittingly enough, the name of the project seems to be a deviation from the Spanish word extraño, which translates to English as strange. It’s an apt title for a project that turns familiar imagery into something incomprehensible and otherwise. And as it turns out, the estrangement is exactly what Javier has felt throughout his career.

“Moving to Boston in 2006 was a bittersweet experience,” he reveals. “Having moved from Cuba to Venezuela in the early 90s, I already knew what it was like to start from scratch, but it was a bit more difficult the second time around because I was older and had to leave friends and family behind me. Also, culture shock is a real thing.”

It wasn’t all bad news, however, from what people said: “On the other hand, being here has shaped my creative career and opened many doors for me. I also met amazing friends and my wife.”

In addition to working on projects such as Xtrano, Javier also works as a designer and art director by trade. And after years of working for other local agencies and internal departments, he decided to start his own creative studio called Barnada.

“I work on branding for a wide range of clients,” says Javier. “It’s just me at the moment, but the plan is to evolve and become something still boutique but a bit bigger.

“We are a creative studio specializing in branding, design and marketing strategy. We partner with our clients to develop a compelling brand identity and help tell their unique story, with the belief that effective branding transcends tendencies.”