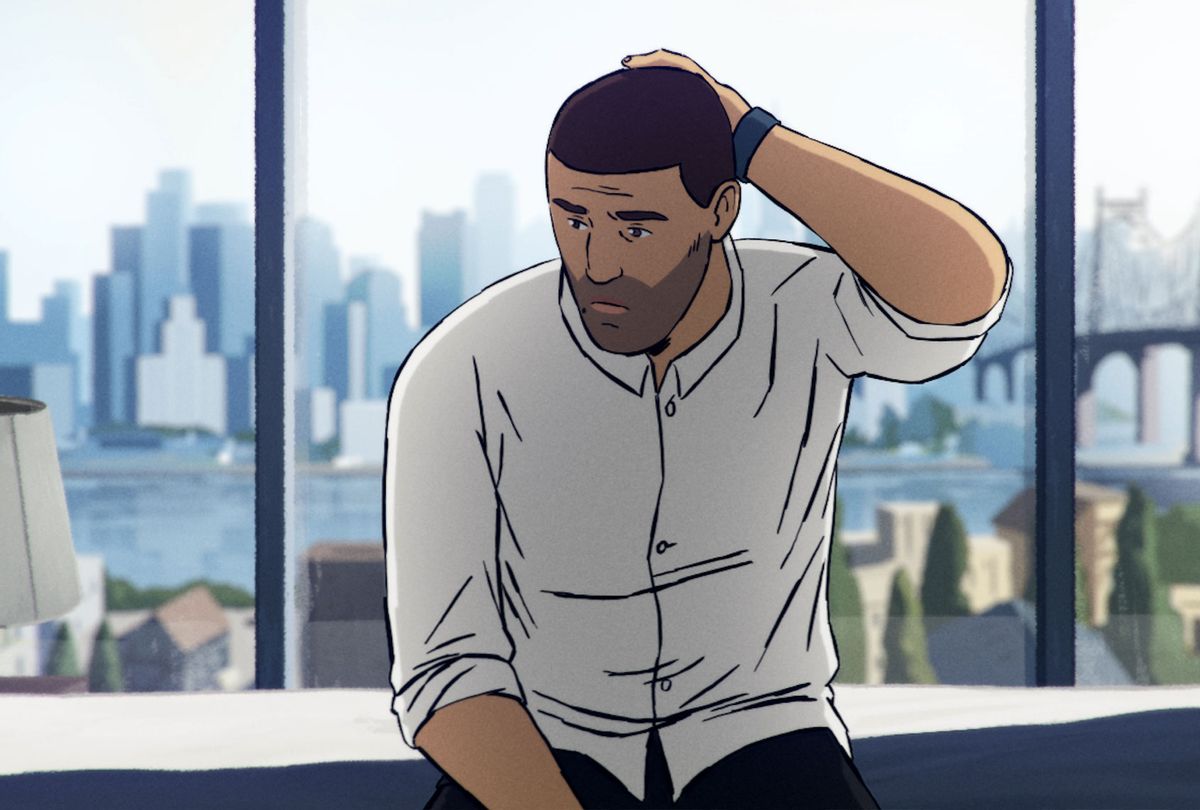 ‘Flee’ director on protecting a refugee’s identity through animation: ‘He always has to hide’

“Flee” made Oscar history by being nominated simultaneously for Best Animated Feature, Best International Feature and Best Documentary. And he truly deserves to win in all of those categories, if not all of them. In this courageous and uplifting film, directed and co-written by Jonas Poher Rasmussen, his friend Amin tells his story as a gay Afghan refugee publicly for the first time.

Rasmussen, who met Amin in Denmark when they were teenagers, recounts Amin’s life in Kabul in the 1980s when his father disappeared and his family emigrated to Russia – the only country that would accept them – because the war was getting too intense at home. “Flee” also depicts the horrors of human trafficking as Amin’s family members seek to get out of Russia. The film also explores Amin’s coming to terms with his sexuality as a young man, as well as his current relationship with his partner Kasper, who wants them to buy a house together.

Rasmussen’s film is thoughtful and graceful in part because of Amin’s emotional memories, but also because the animation helps tell the story as a memory that swings through time. The film is animated to protect Amin’s identity, and it chronicles an emotional journey as Amin struggles to find a home and self-esteem, while living in fear of being discovered as a refugee or queer.

“Flee,” which is available on Hulu, truly deserves the love and votes from Academy members. Salon spoke with Rasmussen about his film and his chances at the Oscars.

What can you say about being nominated in three separate categories, and is there one you would most like to win? Why?

This movie really started in my living room, with a friend of mine, almost a decade ago now. At first we thought, well, if we’re lucky, it’ll be on local TV in Denmark. And here we are nine years later. It’s crazy! I would love to win in any category. Sure, it’s a documentary – a story about my friend – so that’s where I envisioned it myself, but seeing it split into three categories is pretty amazing.

How do you hope voters will react to your film?

He pushes boundaries and uses the medium in ways that haven’t been done much. There have been animated documentaries before, but there are still new ways to tell stories, and telling true stories with animation can make difficult subjects easier. “Flee” is about refugees. There are so many of these stories in the media. “Flee” tells the story of a refugee in another, slightly more creative way. Here you don’t have to relate to a human face; animation facilitates you and makes you listen more.

Obviously, the animation was used to protect Amin’s identity. Can you discuss how you approached the story visually, blurring the faces of authority, changing the film’s style or palette for the setting?

It was really important for us to keep the core of the film like Amin’s testimony and the style of the animation supporting what is being said. We did a lot of research to find out what things were like in Afghanistan in the 1980s and Moscow in the 1990s, and made sure we could seamlessly switch between stock footage and animation. It was important that we have authenticity everywhere so that people don’t dismiss this as fiction. The film is a documentary, and it is real. Authenticity was really crucial. We have found our references in visual artists, painters, photographers, action films, documentary films, animated films. We were picking and choosing things that we thought could help us.

The film is about loneliness and loneliness, so we took a lot of inspiration from Edward Hopper’s paintings on how to deal with light and color, because there’s a feeling of loneliness. For Moscow, we used the images of photographer Alexander Gronsky. For the night walk sequence in the forest in Russia and Estonia, the lighting was inspired by the South Korean action movie “Burning”. Each sequence had different inspirations.

Your film is a documentary, but it tells its story through interviews with its subject, flashbacks, reports and dramatization. Can you talk about your approach to creating the narrative?

It was about listening carefully to how he told the story, hearing his voice and seeing it happen in dramatizations rather than asking Amin to explain everything in voiceover. When he starts talking about his trauma, it gets very emotional, and it’s important that we hear his voice say it — that we give him space when he can’t speak, or is missing a word, or let him breathe. This gives a humanity to the narration. When he starts talking about trauma, you feel his voice change. We also need to see this in the animation, so we’re moving to more graphic and surreal animation. His voice indicates that it wasn’t about what things looked like, but about an emotion he had. You should see his fear and his sadness, and here the animation was really handy because it could be much more expressive.

Riz Ahmed and Nikolaj Coster-Waldau both became executive producers. Can you talk about their support and the importance given to the film and your Oscar campaign?

This story was important to bring to a wide audience. It’s not just a film, it’s a documentary film addressing the social issues that we have around the world, so to bring out a nuanced refugee story that is important to so many people.

Coming from Denmark, and having done nothing notable before, and Amin being anonymous, it was going to be difficult to attract attention; so having Riz and Nikolaj portraying the film and helping to get some attention. Riz was thrilled to be part of the project. He works a lot on representation in the cinema, and it was completely in his field. He thought this story was so important, so he was happy to help. Nikolaj lives 10 miles from me in Copenhagen, and he wanted to be part of it. To have those voices like that and ask Bong Joon-ho to write a letter about how he liked the movie. To have that behind us, to bring attention to a movie that’s a dual-niche project — because it’s an animated documentary — we need that push. It’s not something people turn to when they want to see a movie on a Friday night.

Want a daily recap of all the news and commentary Salon has to offer? Subscribe to our morning newsletter, Crash Course.

How do you perceive the performance of “Flee” compared to its competitors?

Of course, it is difficult; there are such amazing films in the competition. I hope people will understand the story and see it. In the animation category, we’re the odd one out because the movies are about dragons and kids’ movies, and ours is a heartbreaking story of refugees. It will be very difficult to get that one. But I think a lot of people in the animation industry will appreciate the hard work put into this low-budget animated film, and will appreciate that animation as an art form can be used for more than just children’s movies. I hope people will see that this movie tried to do something else and vote for it.

In the Documentary category, all the films are beautiful and important. I hope we win, but I feel like by getting all three nominations, we’ve come a long way.

“Flee” also features a story about Amin’s sexuality, his relationship with Kasper. How do you think the film made a topic not mentioned in Afghanistan more important in our culture?

For me, the story of him being a gay boy from Afghanistan and arriving in Denmark and unable to be honest about his past – he always has to hide things. In Afghanistan he had to hide that he was gay, and in Denmark he had to hide his past. This notion of people who can’t be honest about who they are – whether they’re LGBTQ people in Afghanistan, or other places in the world where that’s not accepted, or whether they’re refugees who can’t being honest about where they come from, it’s crucial to create space for them to be who they are. I would like Afghans to see this film and accept that if they have a gay son in their family, that’s fine, and we can live with that. It’s hard for us to get screened in Afghanistan right now, but hopefully at some point.

I understand that Amin needs his identity protected. Will he be at the Oscars?

No. For him, all of this is overwhelming. With all the fuss surrounding the movie, he’s even happier that he’s anonymous.

“Flee” is streaming on Hulu (with an additional dubbed version for accessibility) and is available on demand. Watch a trailer below, via YouTube.