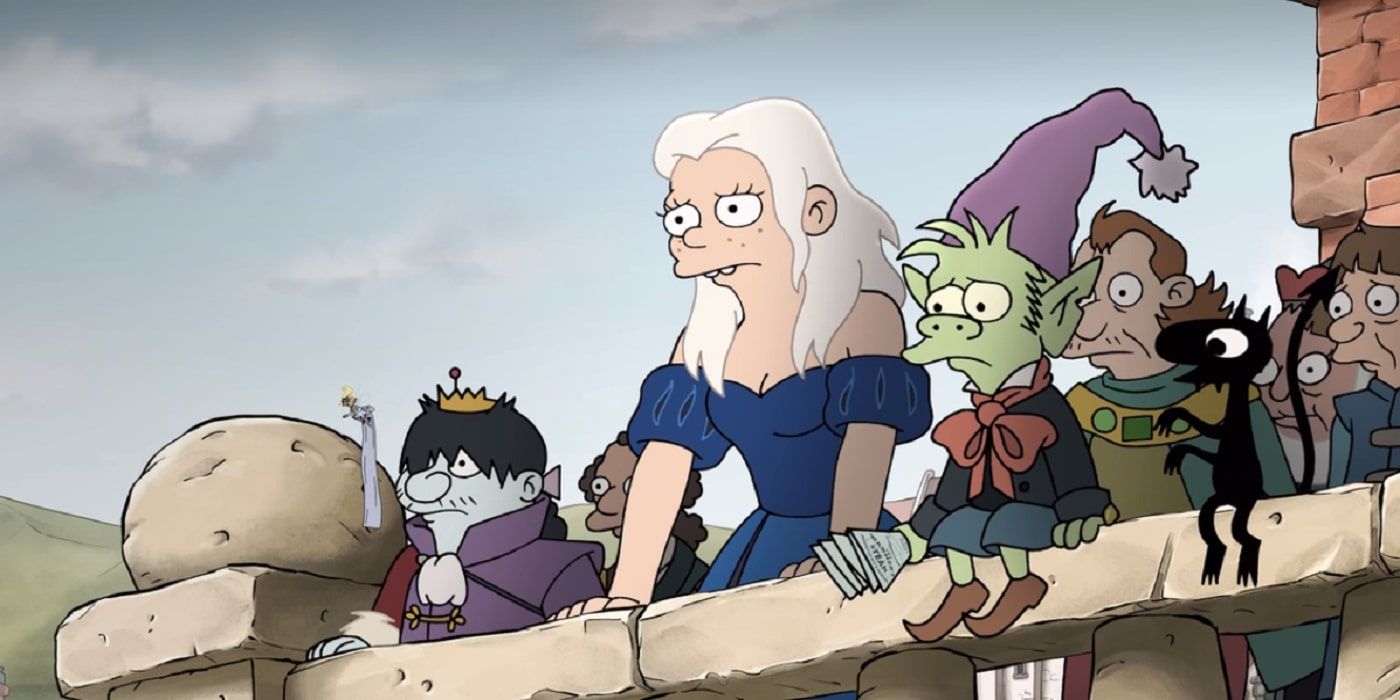 WARNING: The article contains spoilers for Parts 1-4 of Disenchantment now on Netflix.

Disenchantment, the animated fantasy show created by Matt Groening, has released its part 4 on Netflix. Although it’s an animated show, it’s not afraid to tackle topics related to mental health and how its characters are affected by trauma.

Disenchantment is a fantasy story that follows Princess Tiabeanie, more affectionately known as Bean, and her two friends, Elfo and Luci. The trio go on an adventure together, during which they face many trials and tragedies that they must overcome. Bean and others have to deal with the trauma of certain life events, which impacted their lives. Disenchantment puts them at the center of the series, resulting in more rounded and authentic characters.

As a princess, Bean has a privileged life residing in a castle and having access to vast amounts of wealth. She, however, feels trapped by her title and is unable to choose how she wants to live. To process these emotions, she goes out drinking almost every night while playing and fighting. She may also be doing it to rebel against her father and regain control of her life. It seems that the issues and feelings she tries to deal with while drinking are mostly related to her family.

King Zog, her absent father, was never really there for her. If he wanted something done, he would scream and scream. Bean also lost her mother at a young age, meaning she no longer had a caring parent to guide her. When her father remarried Queen Oona and her younger brother Derek was born, she was no longer in contention for the throne. Bean grew jealous of her stepmother and soon came to resent Derek. Although it seems that Oona tried to be more of a parent to her than her real parents.

She was angry and frustrated that no one understood her and her struggles. She wasn’t like ordinary princesses, and she didn’t want to act like one. However, her father continued to push her to fit into the role, even trying to marry her off to Prince Guysbert. By trying to force Bean to do what he wanted, he only pushed her away even further and got her to take out her frustrations by drinking.

As the show progresses, Bean learns more about herself and what she wants out of life. In Part 4, she discovers that she had an evil doppelganger she calls Bad Bean living in her mind. Bad Bean, which was created from her mother’s magic, caused Bean to make bad decisions. With no one playing a guiding role in her life, Bean easily fell prey to her. At the end of the final season, she finally takes control of her actions by cutting off the head of her evil half.

King Zog has also been through a lot. He was betrayed, shot, overthrown and even buried alive. It was the culmination of all of this that led to his breaking point. During Part 3, he slowly loses his grip on reality. He even mentions how in fits of lucidity he can tell what is going on and how he is powerless to do anything about it. After a while, he can only honk and scream, which is when he is admitted to Twinkletown Insane Asylum. Her condition could have developed because of things that were beyond her control and her inability to change them.

At the asylum, he is buried alive, again, but in a wall by his roommate. However, this time he acted differently by not panicking and taking control of the situation by digging himself in. After his escape, he also stops at a monastery where he learns inner reflection. At this point, Zog is doing a lot of introspection, thinking about how he has acted and treated his family members in the past. Upon his return, he tries to be a better parent to his three children, whom he discovers is the son of Ursula, his long-lost love.

Dagmar as a toxic parent

When Dagmar returned at the end of Part 1, Bean was relieved that her mother had finally returned to her. Her image of the loving parent she had organized in her mind seemed to have come true. However, Bean quickly learned that it was all just an act. The only reason she had a child was to fulfill the prophecy and pay off their family’s debt to hell. Dagmar is shown to be a toxic parent, as she is verbally abusive towards Bean and even gaslights him.

Her mother’s actions are meant to shatter her self-esteem and make her feel like she has no control over her life, much like she had felt before. Bean slowly comes to terms with the fact that her mother is evil and she needs to confront her, which she tries to do through her dreams. Although in Part 4, Bean soon realizes that she was pursuing herself and not her mother, suggesting that she needs to do more work on herself if she is to fully overcome these feelings.

Many characters in Disenchantment have experienced traumatic events that impacted their lives, whether they were buried alive or forced to fulfill an evil prophecy. They each find their way through these difficult times by confronting themselves and others.

All four parts of Disenchantment are currently available to stream on Netflix.

Dana da Silva is a Mozambican digital content creator based in Johannesburg, South Africa, who works as a television feature writer for CBR. She has a variety of skills and years of experience as a journalist, project manager and editor. His interests span a variety of different fandoms including Star Wars, Anime, Doctor Who, the MCU, and more. When it comes to her writing, she strives to present topics that focus on inclusion, representation, and diversity. Having completed her Masters in Journalism and Media Studies in 2021 on the representation of LGBT+ people in the South African print media, her writing aims to be balanced and well-researched. Her hobbies include reading #BookTok books, cosplaying, playing DnD, and watching the latest TV shows and movies.