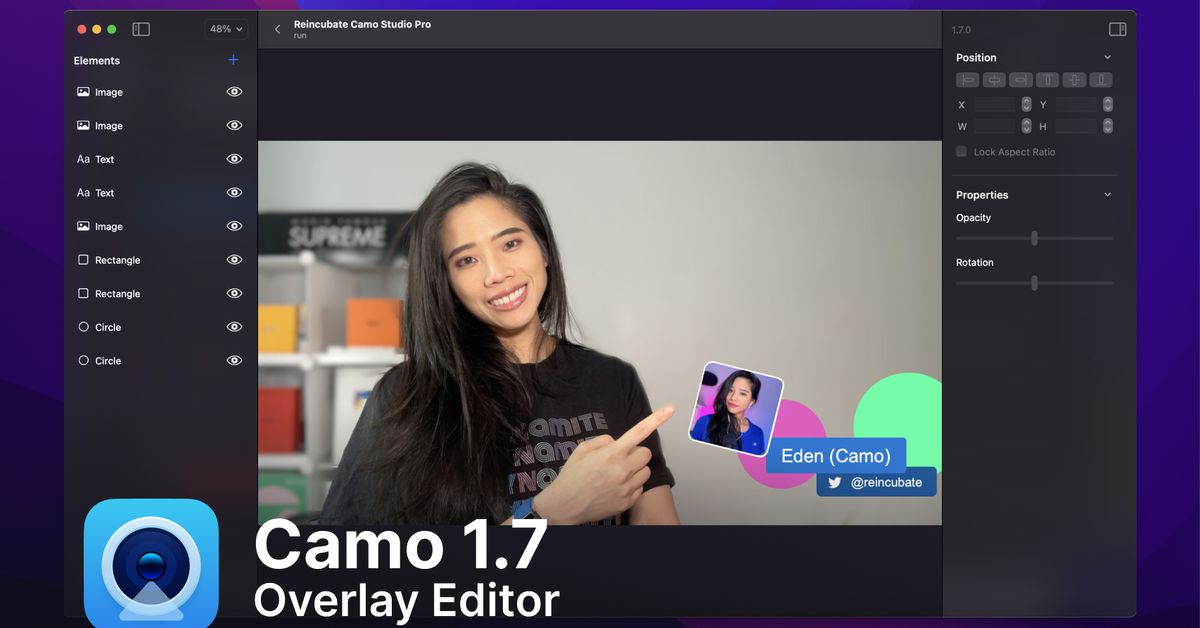 Camo, an app that lets you use an iOS, Android, or iPadOS device as a webcam for your computer, introduces a new feature that could be great for streamers and those who take every Zoom meeting very seriously. The app now includes the ability to create overlays and add them to your video feed, allowing you to include information such as your social media handles or your name and pronouns wherever your video appears.

Camo is adding overlays at a very interesting time – Apple just announced a feature called Continuity Camera, which will also let you use your iPhone as a webcam for your Mac without having to install any additional software.

Reincubate, the company behind Camo, says the feature is part of Thursday’s 1.7 update. Using the desktop app (which also handles ripping video from your phone to your computer and adjusting settings), you’ll be able to choose from 17 template overlays, which you can change to suit your needs. You can also create your own overlays, adding text and graphics with a drag-and-drop interface.

The company says you’ll be able to switch between different overlays via hotkeys, which could be handy for people who do a lot of presentations or streaming and haven’t added any Stream Deck-like hardware to their setup. Camo users will also be able to export and import overlays, which could be handy for groups who all want their video streams to look the same (like in a game streaming company or collective).

Adding overlays to your webcam footage isn’t a new idea; programs like Open Broadcaster Software (commonly known as OBS) and StreamElements have let you do this for quite some time. But setting it up to work with other programs like Zoom, Teams, or Discord might be a bit tricky. Camo, on the other hand, boasts that using its software with most video conferencing apps is as easy as changing the camera input.

Camo’s press release is quick to point out some of the benefits of its solution, even without the addition of overlays. The company says its app “goes far beyond the unreleased functionality of Apple’s Continuity Camera, with support for iPad, Windows, Android, overlays, lens selection, control granular image enhancement, AR effects, enterprise support, greater iOS and iPhone compatibility, a powerful SDK, and a host of other features.

But what it doesn’t mention is that some of those features, like the ability to choose which lens your phone uses, portrait mode support, and picture adjustments, need $40 per year Camo Pro subscription if you want to use them with your iPhone or iPad (the company says its Android app “currently offers all features available for free”). It also doesn’t mention the convenience factor; Continuity Camera will work wirelessly, while Camo requires connecting your phone to your computer with a cable.

That said, that little effort (and, potentially, the money spent) will give you far more functionality and flexibility than Apple promises. And the overlay editor will be part of the free version of the app, according to an email to The edge from Reincubate’s head of marketing, Dean Maskell, which definitely helps Camo’s case.

While many people with both iPhones and Macs will likely opt for the free built-in Continuity Camera, this update feels like the Camo team is doubling down to better serve the niche of people who will appreciate the added features. of the app. To me, it definitely seems like the right decision.