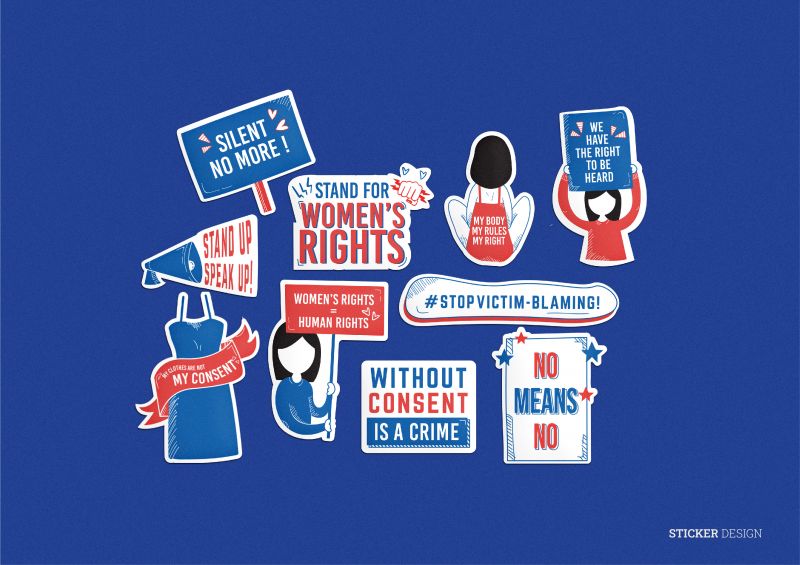 So, in a special series of articles, we take an in-depth look at some of the best work of this year’s 2021 laureates. They range from fun and commercial to personal and impactful. And a good example of the latter is Never the fault of a victim, a project that earned Tiffany Gouw Raffles Design Institute the prize for the discovery of the year.

In many parts of the world, including Indonesia, rape victims are particularly vulnerable to being blamed for their assault, compared to victims of other interpersonal crimes. Never A Victim’s Fault aims to better understand why this is happening and the importance of changing the culture of victim blame.

The project also aims to guide women on how to deal with this problem in the future; remind people that it is never a victim’s fault; encourage those who have experienced sexual violence to speak out; and let them know that they are not without help and support.

Never A Victim’s Fault was created by Tiffany Gouw while studying at Raffles Design Institute, Singapore. She now works in Jakarta, Indonesia, as a freelance illustrator in a media and information company. The context. â€œI design and create illustrations for video purposes that cover modern explorations in business and society,â€ she says.

Describing her illustration style as “contemporary but humanistic,” she says visual research is a big part of her creative approach.

â€œWhenever I have free time, I explore designs from different genres and styles for inspiration,â€ says Tiffany. â€œWhile drawing, I will visualize my inspirations and keep them in my ideas box. I also love to read, especially hot topics related to what’s going on in the world, from social issues to environmental documentaries.

Tiffany’s project focuses on the culture of victim blame that dominates Indonesia, especially when it comes to sexual assault.

â€œPeople tend to blame victims for wearing inappropriate clothes and think they are overreacting as well,â€ she says. â€œThis causes the victims to remain silent: they dare not share their stories, knowing that they will be blamed. Unfortunately, this can cause them to have suicidal thoughts and mental health issues.

By creating an illustration book that shows what victims go through, Tiffany aims to educate people to become more aware of victim blame and support victims.

“I also want to sensitize victims when they are confronted with this problem”, she adds, “to remind them that it is never their fault and that they have the right to express themselves”.

It was not an easy subject to broach. â€œThe nature of the topic is quite controversial, especially in Indonesia, so I struggled during the research phase of the project,â€ Tiffany recalls.

Deciding on the tone and manner of all the work was another challenge on top of that. “I wanted it to be accessible and easy to understand, while being abstract enough to express the emotional side of the subject,” she explains.

But the work paid off and she is delighted that the project has been recognized. â€œWinning the Indigo Award has definitely given my career development a boost, especially for a new graduate,â€ she says. “It gave me new confidence and, most importantly, motivated me to push the limits of creativity.”

Want to register for next year? Then you will be happy to hear that the Indigo Prize 2022 is now open for nominations. You must enter your work before September 30, 2021 and can find all the details you need at indigoawards.com.

How to make amazing slow motion videos on Android – phandroid