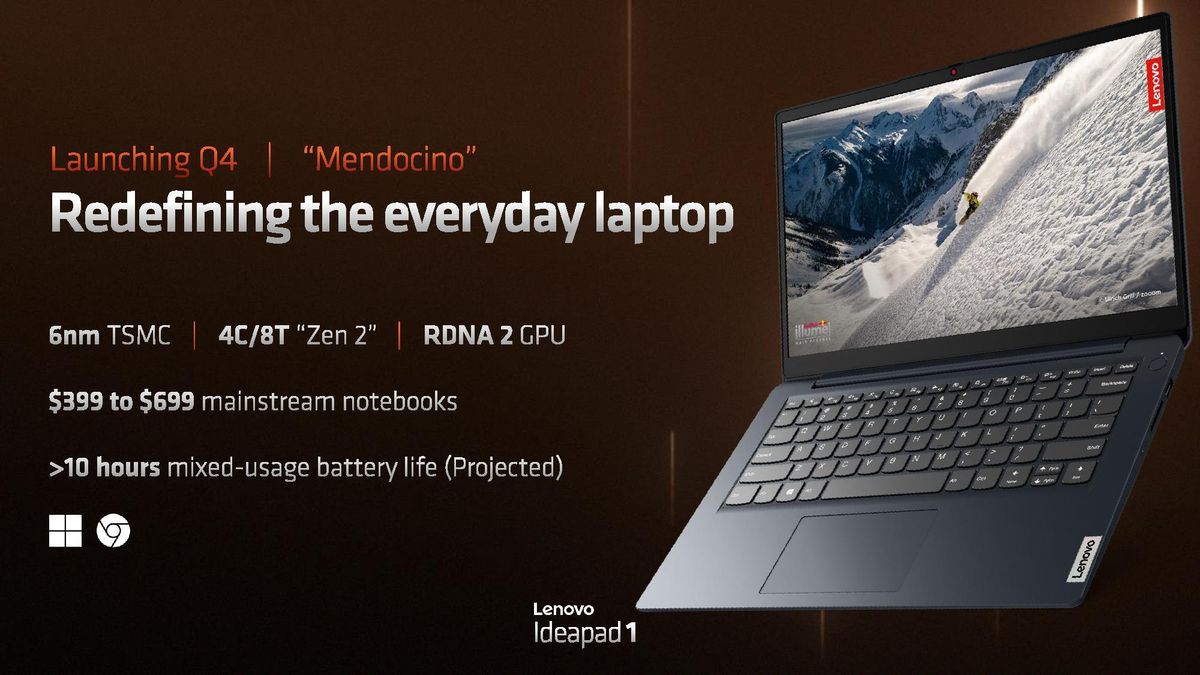 Rembrandt brings together AMD’s Zen 3+ cores and RDNA 2 graphics in a single package. With Mendocino, however, the chipmaker opted to roll with the Zen 2 microarchitecture instead, but stuck with the RDNA 2 solution. This is the exact blueprint AMD used for Van Gogh, including Aerith (the Custom APU in the Steam Deck) is derived. Therefore, Mendocino is essentially an offshoot of Van Gogh but on a more recent process node. Mendocino also has access to LPDDR5 memory, although AMD did not disclose the nature of the memory bus.

Van Gogh is on TSMC’s 7nm process node. Rembrandt and Mendocino take advantage of TSMC’s 6nm manufacturing process. The 6nm “N6” process node provides up to 18% higher logic density with the same power and performance compared to the 7nm “7N” process node that was previously used for the Ryzen 5000 series (Cézanne).

While we’ve seen Rembrandt max out at eight cores and 16 threads, Mendocino will only hit half that number. The highest Mendocino part will offer four Zen 2 cores with eight threads. AMD did not share Mendocino’s specs. In terms of processing power, one would expect something like AMD’s Ryzen 4000 (Renoir) chips which also use Zen 2 cores. However, Renoir was on TSMC’s 7nm process node; therefore, Mendocino should theoretically exhibit improved clock speeds as a product of the 6 nm process node.

On the graphics side, Mendocino embeds the RDNA 2 graphics engine. As a result, consumers will enjoy all the video encoding and decoding capabilities of RDNA 2 at a more accessible price. Again, AMD did not go into specifics. The Radeon 680M, Rembrandt’s high-end iGPU, comes with 12 RDNA 2 compute units. Being a lower-tier APU, Mendocino is likely to see a lower number of compute units, possibly between six and eight units Calculation. It’s plausible that we could get a Steam Deck-like level of performance in a laptop with Mendocino.

One of Mendocino’s strengths is its battery life. AMD has estimated a minimum of 10 hours of battery life based on mixed usage. We’ve seen better with AMD’s other Ryzen mobile chips. However, Mendocino will power laptops that cost between $399 and $699, and in this price range most consumers expect battery life between four and six hours, no more than 10.

AMD has big plans for its Ryzen-powered laptop expansions across the various segments. The chipmaker has planned over 60 enterprise, 50 high-performance, and 90 ultra-thin designs for the remainder of 2022. As for Mendocino, we can expect to see devices with the new 6nm mobile APUs in the fourth quarter of the year in Windows and ChromeOS devices.