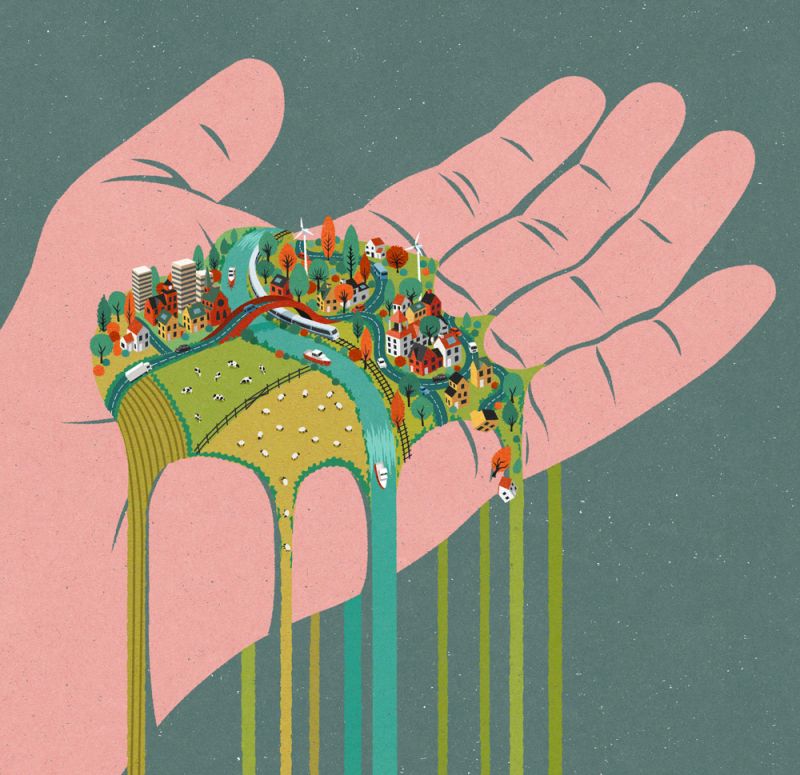 The Sheffield-based designer studied graphic design at college where they used pens, rulers and photo transfer machines and entered the workforce during a recession where jobs were scarce. â€œIf that wasn’t enough, the industry was going through a big change,â€ John tells us.

â€œComputers and digital technology meant that all of my analog work in my portfolio was useless. My only way to access anything creative was illustration, and acrylic was something I was pretty good at. After spending the next few years perfecting my work, I was faced with the decision, should I continue to work painfully on the painting of a commissioned job that takes days or should I go digital and create a job that takes a fraction of the time? “

With the digital revolution showing no signs of slowing down, John finally embraced the technology and work slowly picked up. “It was not a decision that I took lightly,” he said. â€œI was never a computer whiz and I guess I avoided technology until I had no other choice. It took me a while to convert, but by the time I got used to digital work, I could no longer work on the canvas, posting it and praying that they would send the art back to me. There were times when I had urgent work and I had to stay awake all night to finish it, now I can create works of art in a matter of hours. “

Those days of acrylic painting were not wasted, however. John thinks they helped him get to where he is now. â€œMy concepts haven’t changed and in some ways my style hasn’t changed, it just grew and developed but unlike acrylic, I can email it to clients and make changes. an acrylic job doesn’t make them any more valuable than a digital job, I still have all of my commissions painted in a folder in the loft so they’re worth nothing. However, my digital work is reused and still works for me long after it’s completed . “

Inspired by David Cutter, Mark Ryden and Edward Hopper, John’s work is full of storytelling and meaning, drawing from current events, world events and collective moods. It’s a style that works well for editorial illustration, attracting loyal clients such as The Guardian, BBC, and The New York Times. It also reveals a bit of John’s upbringing as he grew up in Lancashire and moved to Yorkshire at the age of nine in the early 1980s when the miners were on strike Kool & The Gang were featured in the charts and Saturday morning cartoons ruled the world. â€œMy style has evolved organically, there hasn’t been a conscious decision to make it the way it is. The best way to describe it is: understated look, strong message,â€ he says.

As any illustrator knows, the industry is extremely competitive and it is not an easy career choice to make. â€œIt’s been a roller coaster ride for the past 25 years,â€ says John. â€œIn 2008 I was working in a completely different style, my work took a wrong direction and ended up at a dead end. I was convinced that this was the end for me and at that point I suffered back surgery that left me disabled for several months, during which I worked on my new and current style. There is never a time when I feel “safe” and I can stop feeling push, you have to keep pedaling or the bike will fall. “

You could say that the life of an illustrator has to keep pace with what’s going on in the world more than any other creative profession. Climate change, global pandemics, politics and scandal – there’s plenty to keep John busy. â€œThe planet is on the way to destruction, marred by greedy corporations that put profit first and stubborn politicians,â€ John said. “And social media is becoming a propagator of hate, lies, disinformation and control. You could say it’s a godsend of material for artists and satirists, but I just have to think about what I’m seeing.”

John’s main commission work is on specific posts that don’t leave too much room outside of the brief. Along with these works, John creates many personal illustrations: â€œThis is where I can do whatever inspires me, and I guess those are the horrible things. I also try to include positive uplifting work. “

A recent order was for a French media company that wanted to raise awareness about food waste. “The poster was in two halves; the first half was chimneys with smoke above, the second came a week later and was added below the chimneys turned out to be pitchforks and the image of the bottom was spaghetti on a fork, â€he said. Explain. “I really enjoyed doing this and learned that all the factors of food waste account for one third of the overall pollution of the earth’s atmosphere.”