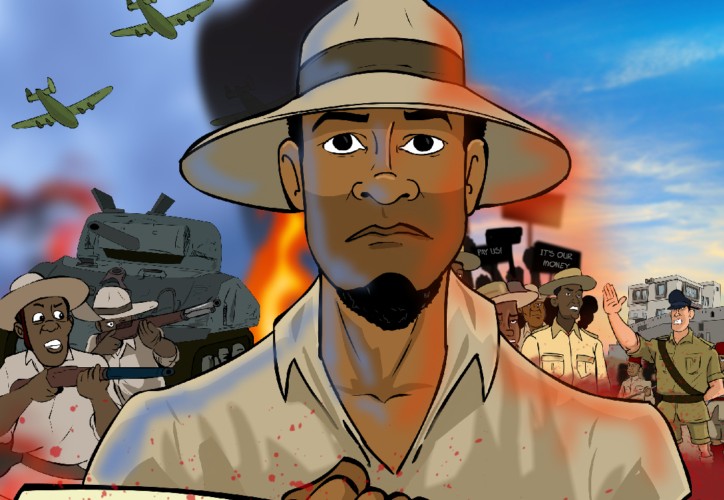 ’28th, The Crossroads’: The first Ghanaian animated film to recreate memorable prime ministers from the shooting of Christiansburg on February 28

Ghanaian-owned Parables Animation Studios in collaboration with Animation Africa in their thrilling new epic film have recreated parts of Ghana’s history through art.

The animated movie ’28th the crossroads’ takes place in the footsteps of the February 28, 1948 shooting.

The feature is primarily woven around the main craftsmen of the Crossroads event, Seargent Adjetey, Corporal Attipoe and Private Odartey Lamptey.

These heroes had returned home after fighting for the British Empire, with dashed hopes and promises. The British, after making numerous promises to resettle them with dignity, however disappointed them.

This illustrative piece traces their attempts to reintegrate into the society they left behind and their frustrations.

Seargent Adjetey stands as that rallying figure leading the peaceful march to Osu Christiansburg Castle, to call attention to their plight.

Unfortunately, the event turns violent, as the British Police Commissioner, Emery, after failing to convince them to retreat, fires directly at them, killing the three heroes and leaving dozens more injured. The sad incident has left a dent in the image of the Gold Coast.

‘28 The Crossroads‘, is a 55-minute creative feature film put together over a period of 37 months. The film’s main voice actor is Adjetey Anang.

The film is set to premiere at SilverBird Cinemas in Accra Mall and West Hills Mall in Weija on February 28, 2022. The film will screen at 7 p.m. and 8 p.m. Tickets sell for GHS50 each.

The premier is a commemorative event to mark the 74th anniversary of the historic crossroads shooting incident.

Curator and producer, Cycil Jones Abban, and his collaborators used the technique of two-dimensional animation to get the message across.

The production relies heavily on references from rich archival documents at the time of the fateful incident as well as interviews.

With this upcoming first, Parables Studios seeks to deepen the use of animation as a creative medium to promote the development and learning of history and civics among students in our schools.

The studio also seeks to use animation to broadly promote affordable experiential learning among young learners and children.

Parable Studios hopes that on the 28th, The Crossroads will go a long way in simplifying abstract information and building learner retention skills.